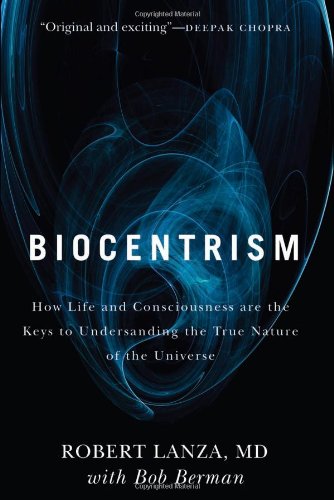 I just discovered a new book a friend recommended: “Biocentrism: How Life and Consciousness are the Keys to Understanding the True Nature of the Universe.” Wow! Quantum Theory has just completed another shift in our understanding of the physical, natural world. It says Life creates the Universe and not the other way around.

For those of us who have been studying metaphysics, or who’ve been on the spiritual path for a while, the response might be, “Ho-hum, I knew that.” After all, we know our Consciousness creates our Reality. But for SCIENTISTS to know that! Now there’s a quantum shift for you!

The writers, acclaimed biologist Robert Lanza and leading astronomer Bob Berman, show that Physics has been thought to be the foundation of all scientific disciplines up till now. However, if you interpret the world through a foundation of Biology rather than Physics, you come up with a very different interpretation — one that, to me, makes a lot more sense. The idea of Biocentrism, which the writers propose, states that our perception of reality is more real than reality itself, that Life does not die when the body dies, and that there are endless parallel worlds and multiple universes existing at the same time, because time and space are products of our perception. Sounds like a spiritual world view to me!

There’s another interesting article about the book at Earth We Are One. What do you think? Leave a comment below!